Homeopathy utilises all areas of Nature. Remedies are made from plant, animal and mineral products, and even disease processes are turned into useful and deep acting medicines.

The process of preparing a homeopathic remedy is called Potentisation. 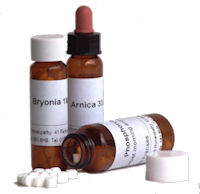 During potentisation a medicine undergoes a series of dilutions and succussions to render it safer, yet more potent.

The most commonly available scale of Potency is the centesimal scale of Potency denoted on the medicine label by the roman numeral C, standing for 100. The dilution rate is 1 drop in 99 drops of water/alcohol mixture.

This is how it is done:

By the time we get to Chamomilla 12C there is not a single molecule of the original Chamomile mother tincture left in the liquid we have produced and common sense dictates that the liquid should produce no effects whatsoever. Yet Homeopaths have observed that the more you dilute and succuss a liquid the more effective the medicine becomes and the fewer the side effects are, and this is why even deadly poisonous plants such as Deadly Nightshade can be made into a safe and extremely effective Homeopathic Remedy. Homeopathy is one of the safest forms of medicine suitable for everyone, including the very young, pregnant women and the very old.

When taking Homeopathic Remedies it is important to observe 2 simple points:

All Homeopathic Remedies are tested on healthy volunteers. Like Hahnemann they take the homeopathic medicine to be tested until they produce symptoms. These symptoms are carefully recorded and make up the remedy picture of a substance. All symptoms – mental, emotional and pysical – are recorded. These tests are called Provings. Nowadays provings are carried out double blind, meaning the provers do not know what they are taking. Animals are never used to test Homeopathic Remedies. Animals only benefit from them.